Custom Core Data migrations are somewhat of an obscure topic. Apple provides little documentation on the subject, and it can be a frightening experience when first ventured into. Given the nature of client side programs, there’s no way to test all the possible permutations of datasets that your users will have. Moreover, it’s very hard to fix any issues that might occur during migration and rollback isn’t an option since you most likely have code that depends on the latest data model.

In this article we’ll go through the process of setting up custom Core Data migrations, with a focus on refactoring the data model. We’ll look into extracting data from the previous model and using that data to populate the destination model with new entities and relationships. In addition, there’s an example project including unit tests that demonstrate two custom migrations.

Note that for simple changes to the data model, like adding an entity or optional attribute, lightweight migrations are great. They're extremely easy to set up which is why the topic won’t be brought up in this article. To find out what kind of changes are supported by lightweight migrations and which are not, take a look at the official documentation.

That said, if you work fast and need to make relatively complex changes to your data model, custom migrations are for you.

The general idea is to manually figure out the mapping model between the current version v and v+1, migrate between those, and continue recursively until the persistent store is compatible with the current data model.

This looks something like this (the full version can be found in the example project):

Credit for the major chunk of this code goes to Marcus Zarra, who wrote a great book on Core Data. Check it out here.

Since iOS 7 and OS X Mavericks, Apple changed the journaling mode for SQLite stores to Write-Ahead Logging (WAL), which means transactions are appended to a -wal file. This causes copies of the store to likely result in data loss and inconsistencies. To safely back up our store, we’ll change the journaling mode to rollback mode. This is easily done by passing a dictionary to -addPersistentStoreWithType:configuration:URL:options:error: if we are about to migrate (and subsequently back up the store).

The relevant code to create the NSPersistentStoreCoordinator can be found here.

NSEntityMigrationPolicy is the essence of the custom migration process. From the documentation:

Instances of NSEntityMigrationPolicy customize the migration process for an entity mapping. Simply put, this class allows us not only to modify the attributes and relationships of an entity, but do any other processing we might need as each instance of that entity is migrated.

Let’s say we have a book app with a simple data model. There are two entities: User and Book. The Book entity has an attribute called authorName. We want to improve this model and add a new entity: Author. We also want to create a many-to-many relationship between Book and Author, as a book can have multiple authors, and an author can write multiple books. We will extract the authorName from the Book object, and use that to populate a new entity and establish the relationship.

The very first thing we need to do is to add a new model version based on the first data model. For this example, we added an Author entity with a many-to-many relationship with Book. 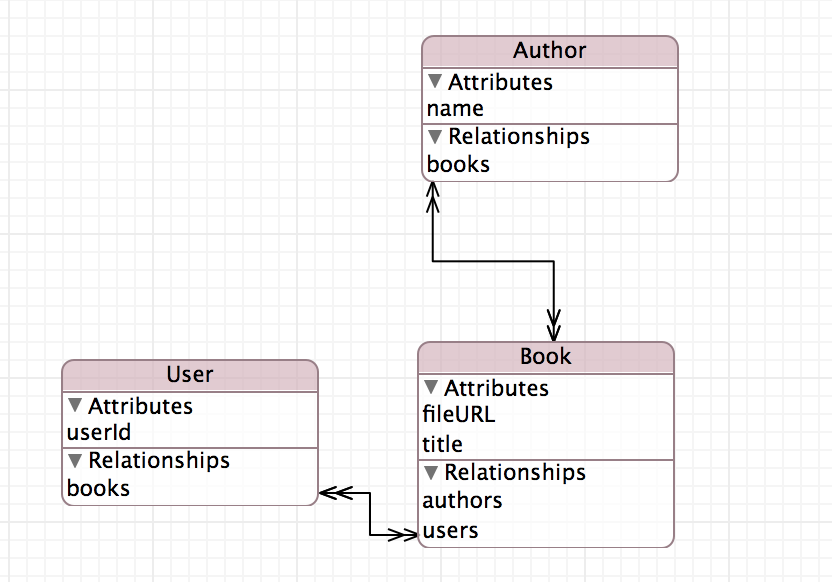 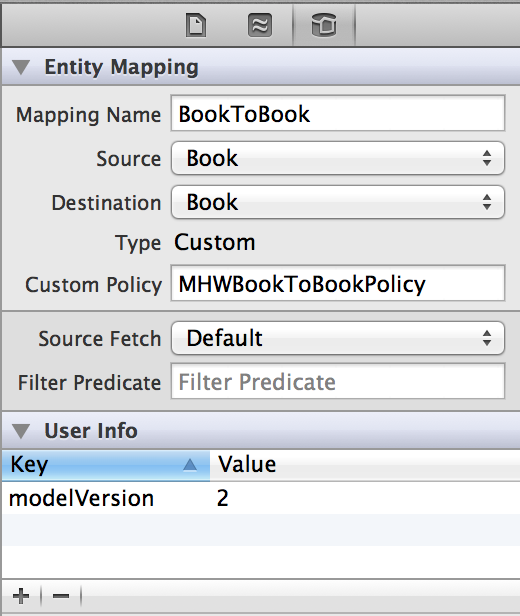 We also use the user info dictionary to set a modelVersion which will come in handy in future migrations.

In MHWBookToBookPolicy we’ll override -createDestinationInstancesForSourceInstance:entityMapping:manager:error: which lets us customize how to migrate each Book instance. If the value of modelVersion isn’t 2, we’ll just call the super implementation, otherwise we need to do a custom migration. We’ll start off by inserting a new NSManagedObject based on the mapping’s destination entity into the destination context. Then we iterate through the attribute keys of the destination instance and populate them with the values from the source instance. This ensures that we preserve the existing data and avoid setting any values that have been removed in the destination instance:

Then we’ll create the Author entity, based on the values from the source instance. But what happens now if there are multiple books with the same author? We’ll make use of a category method on NSMigrationManager to create a lookup dictionary, making sure we only create one Author entity for each unique Author name:

Finally, we need to tell the migration manager to associate data between the source and destination stores:

In a category on NSMigrationManager:

In the previous migration, we were only migrating one entity. When we add File, things become a bit more tricky. We can’t simply insert a File entity when migrating a Book and set its relationship with User, because the User entity hasn’t yet been migrated and has no files-relationship. We have to think about the order in which the migration is executed. In the mapping model, it’s possible to rearrange the order of the entity mappings. For this case, we want to put the UserToUser mapping above the BookToBook mapping. This guarantees that the User entity will be migrated before the Book entity.

The approach for adding a File entity is similar to when we created the Author entity. We’ll create File objects when we migrate the Book entity in MHWBookToBookPolicy. We’ll look at the source instance’s users, create a new File object for each user, and establish the relationship:

If your store contains a lot of data, to a point where the migration will consume too much memory, Core Data provides a way to migrate in chunks. Apple briefly mentions it here. The approach is to separate your migration using multiple mapping models and migrating once with each of the mapping models. This requires that you have an object graph in which migration can be divided into two or more parts. The code we need to add to support this is actually very little.

First, let’s update our migration method to support migrating using multiple mapping models. Since the order of mapping models is important, we’ll ask for them in a delegate method:

Now, how do we know which mapping models to use for a particular source model? The API here makes this a bit clumsy but the following solution does the job. In the delegate method, we figure out the name of the source model and return the relevant mapping models:

We’ll add a category on NSManagedObjectModel that helps us figure out its filename:

Setting up unit tests for this is surprisingly simple:

Steps 1 and 2 are simple. Step 3 is left to the reader as an exercise, and I will guide you through step 4.

When the persistent store file has been added to the unit testing target, we need to tell the migration manager to migrate from that store to our destination store. This is demonstrated in the example project like this:

Put this code in a superclass, and reuse it in test classes that test migration:

When doing lightweight migrations, the migration occurs directly inside the SQLite store. This is very fast and efficient compared to custom migrations, where the source objects need to be fetched into memory, their values copied onto the destination objects, their relationships re-established, and finally inserted into the new store. Not only is this much slower, it can also impose problems when migrating larger datasets due to memory constraints.

Add More Data Than You Think You Might Need

One of the most important things when working with any type of data persisting is to think through your model carefully. You’ll want it to be sustainable. Put more things into your data model than you think you might need. Empty attributes or entities is better than having to migrate and create them later on. Migrations are prone to mistakes. Unused data is not.

A useful launch argument when testing migrations is -com.apple.CoreData.MigrationDebug. When set to 1, you will receive information in the console about exceptional cases as it migrates data. If you’re used to SQL but new to Core Data, set -com.apple.CoreData.SQLDebug to 1 to see actual SQL commands.