Testing is an important tool during the development process to create high quality applications. In the past, when concurrency was not such an important part of application architecture, testing was straightforward. Over the past few years it has become more and more important to use concurrent design patterns and we were challenged to develop new best practices to test them.

The main challenge of testing concurrent code is that the program or information flow is not reflected in the call stack any more. Functions do not return their result to the caller immediately, but deliver it later via callback functions, blocks, notifications, or similar mechanisms, which makes testing more difficult.

The Problem with Asynchronous Testing

Let's first recall an example of a simple synchronous unit test. This method of a simple calculator should sum up two numbers:

Testing this method is as simple as calling the method and comparing the result to the expected value. If the values don't match, the test fails.

Now let's change the method to return its result asynchronously via a completion block. We will also add a bug to the implementation, so that we can expect a failing test:

Of course this is a contrived example, but it reflects the general pattern you would use often if the operation would be more computationally intensive.

A naive approach to testing this method would just move the assertion into the completion block. However, such a test simply never fails, in spite of the bug in our implementation:

Why doesn't this assertion fail?

The testing framework used by Xcode 4 is based on OCUnit, which allows us to have a closer look at the internals. To understand the problem with the asynchronous test, we need to have a look at the execution order of the different parts of the test suite. This diagram shows a simplified flow. 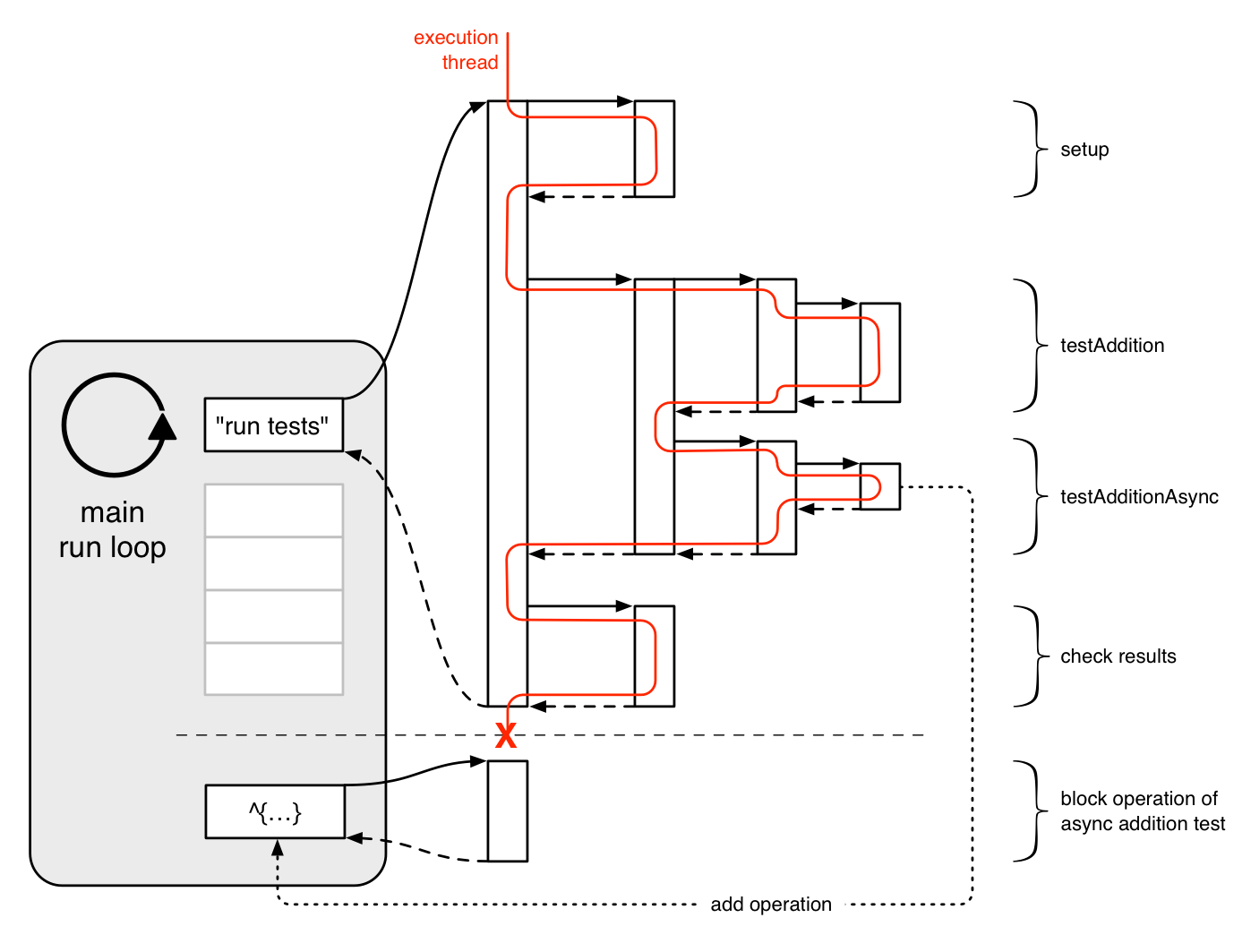 After the testing kit is started on the main run loop, it executes the following main steps:

The interesting part is how each individual test is invoked. During the asynchronous test, the completion block containing the assertion gets enqueued on the main run loop. Since the testing framework exits the process after all tests run, this block never gets executed and therefore never causes the test to fail.

There are several approaches to solve this problem. But all of them have to run the main run loop and handle the enqueued operations before the test method returns and the framework checks the result.

Our solution to this problem is an extension to the built-in testing kit, which winds up the synchronous execution on the stack and enqueues each part as a block on the main queue. As you can see in the diagram below, the block that reports the success or failure of the asynchronous test is enqueued before the results of the entire suite are checked. This execution order allows us to fire up a test and wait for its result.

To give the framework a hint that a test should be treated as asynchronous, the method name has to end with Async. Furthermore, in asynchronous tests, we have to report the success of the test case manually and include a timeout, in case the completion block never gets called. We can rewrite our faulty test from above like this:

As with their synchronous counterparts, asynchronous tests should always be a magnitude simpler than the implementation they are testing. Complex tests don't promote better code quality, because the possibility of bugs in the tests increases. In a test-driven development process, simple tests let us think more clearly about the borders of components, their interfaces, and the expected behavior of the architecture.

To put all this into practice, we create an example framework called PinacotecaCore, which requests information of images from a hypothetical server. It has a resource manager, which is the developer-facing interface, providing a method to get an image object with an image id. In the background, the resource manager fetches the information from the server and updates the properties in the database.

Although this is only an example project for the sake of demonstration, it shares the pattern we use in several of our apps. 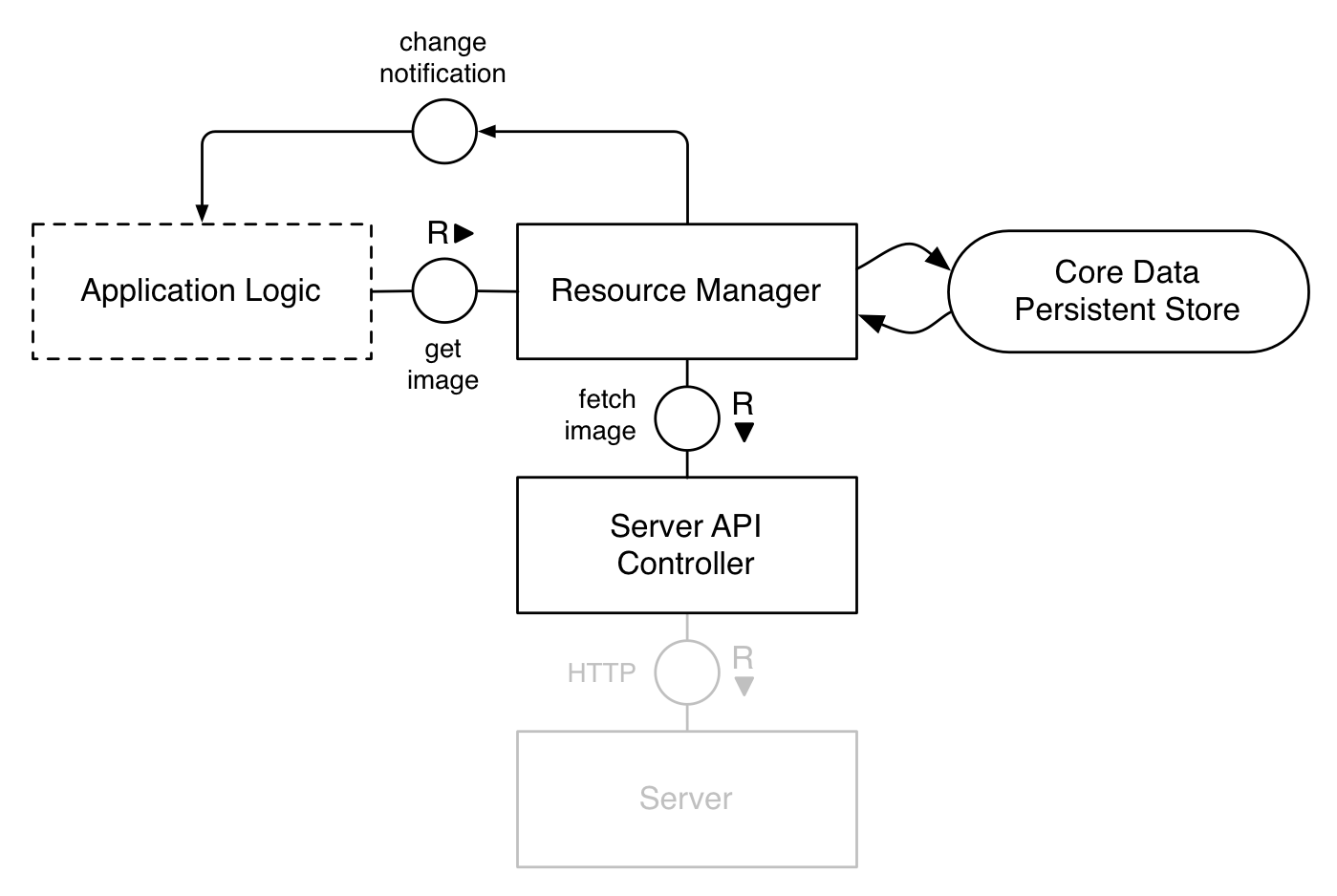 With this high level overview of the architecture we can dive into the tests of the framework. In general there are three components which should be tested:

Tests should be synchronous whenever possible, and the model layer is a good example. As long as there are no complicated dependencies between different managed object contexts, the test cases should set up their own core data stack with a context on the main thread in which to execute their operations.

In this example, the test case sets up the core data stack in setUp, checks if the entity description for PCImage is present, creates an object with the constructor, and updates its values. As this has nothing to do with asynchronous testing, we won't go into further details here.

The second building block of the architecture is the server API controller. It contains the logic to manage the mapping of the server API to the model and handles the requests. In general, we want to evaluate the behavior of the following method:

It should be called with the id of an image and call the completion handler on the given queue.

Because the server doesn't exist yet, and because it's a good habit, we will stub the network request with OHHTTPStubs. With the newest version, the project can contain a bundle with example responses, which will be delivered to the client.

To stub a request, OHHTTPStubs has to be configured either in our test setup or in the test itself. First we have to load the bundle containing the responses:

Then we can load the response from the bundle and specify for which request it should be returned:

With this setup, the simplified version of the API controller test looks like this:

The last component is the resource manager, which ties the model layer and the API controller together and manages the core data stack. Here we want to test the method to get an image object:

This method should return an image object for the given id. If this image is not in the database, it will return a new object containing only the id and call the API controller to request the detailed information.

Instead of calling the real method of the API controller, the test will use the method implemented in the test case itself.

Testing applications using concurrent design patterns can be challenging at first, but once you understand the differences and establish best practices, it is easy and a lot of fun.

At nxtbgthng we are using the process described, SenTestingKitAsync, on a daily basis. But the other approaches, like Kiwi or GHUnit, are also good ways of doing asynchronous testing. You should try them all, find your preferred tool, and start testing asynchronously.