People have their own motivations to write tests for their applications. This article isn't to persuade you that you should do it, though in my opinion, you should.

Writing tests for the visual aspects of an app is tricky. There's Apple built-in support for logical testing of objects, but no support for testing the end result of view-based code. This gap in functionality means a lot of people dismiss writing tests due to the difficulty of doing view-based tests.

When Facebook released FBSnapshotTestCase to CocoaPods, I initially dismissed it for this reason. I'm glad one of my coworkers didn't.

FBSnapShotTestCase takes a UIView or CALayer subclass and renders it to a UIImage. This snapshot is used to create tests that compare a saved snapshot of the view/layer and the version generated by your test. When it fails, it will create a reference image of the failed test, and another image to show the difference of the two.

Here is an example of a failing test where we have less grid items than expected in a view controller: 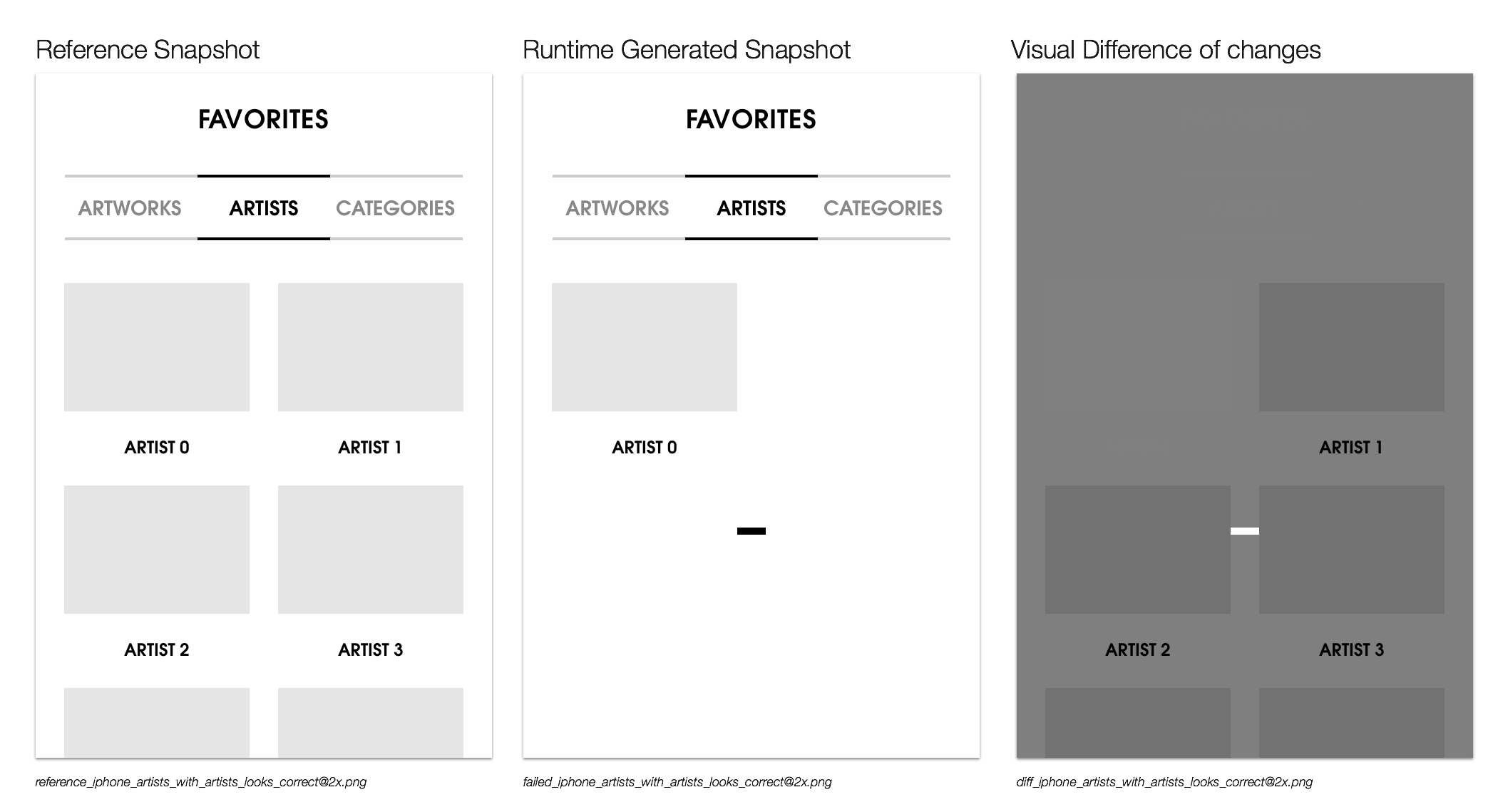 It makes the comparison by drawing both the view or layer and the existing snapshot into two CGContextRefs and doing a memory comparison of them with the C function memcmp(). This makes it extremely quick, with my tests ranging from 0.013 to 0.086 seconds per image for fullscreen iPad and iPhone images on a MacBook Air.

When it's set up, it will default to storing the reference images inside your project's [Project]Tests folder, in a subfolder called ReferenceImages. Inside this is a library of folders based on the testcase class name. Inside the test case folders are the reference images per test. When a test fails, it will generate an output image of the resulting visuals from the test, and an image of the visual difference between itself and the reference. All three images are put inside the application's tmp folder. Snapshots will also NSLog a command to the console to load the two images into the visual diffing tool, Kaleidoscope.

Let's not beat around the bush here: you should be using CocoaPods. So installation is just adding pod "FBSnapshotTestCase" into the tests target of your Podfile. Running the command pod install will install the library.

The default behavior of Snapshots is to subclass FBSnapshotTestCase instead of XCTestCase, and to then use the macro FBSnapshotVerifyView(viewOrLayer, "optional identifier") to verify against an already recorded image. There is a boolean property on the subclass recordMode that, when set, will make the macro record a new screenshot rather than check the result against a reference image.

I don't use vanilla XCTest. I uses Specta and Expecta, which provide a more concise and readable test environment to work in. This is the default testing setup when you create a new CocoaPod. I'm a contributor to the pod Expecta+Snapshots, which provides an Expecta-like API to FBSnapshotTestCase. It will handle naming screenshots for you, and can optionally run view controllers through their view event lifecycle. This means my Podfile looks like:

Parsing the console log to find the references to images is a lot of effort. Loading up all the different failing tests into a visual diff tool like Kaleidoscope requires running a lot of terminal commands.

To deal with nearly all of the common use cases, I built an Xcode plugin called Snapshots. It can be installed via Alcatraz or built yourself. It makes it simple to compare the success and failure images for any inline failed test in Xcode.

FBSnapshotTestCase gives you a way to test view-related code. It can be used to build and visualize view states without jumping through hoops in the simulator. You should use it with my plugin Snapshots if you use Xcode. Sometimes it can be a bit frustrating, but it pays off. It welcomes designers into the code review stage. It can be a very easy first step into writing tests on an existing project. You should give it a try.