The example project for this issue is on GitHub.

Separate Out Data Source and Other Protocols

One of the most powerful techniques to slim down your view controller is to take the UITableViewDataSource part of your code, and move it to its own class. If you do this more than once, you will start to see patterns and create reusable classes for this.

For example, in our example project, there is a class PhotosViewController which had the following methods:

A lot of this code has to do with arrays, and some of it is specific to the photos that the view controller manages. So let's try to move the array-related code into its own class . We use a block for configuring the cell, but it might as well be a delegate, depending on your use-case and taste.

The three methods that were in your view controller can go, and instead you can create an instance of this object and set it as the table view's data source.

Now you don't have to worry about mapping an index path to a position in the array, and every time you want to display an array in a table view you can reuse this code. You can also implement additional methods such as tableView:commitEditingStyle:forRowAtIndexPath: and share that code among all your table view controllers.

The nice thing is that we can test this class separately, and never have to worry about writing it again. The same principle applies if you use something else other than arrays.

In one of the applications we were working on this year, we made heavy use of Core Data. We created a similar class, but instead of being backed by an array, it is backed by a fetched results controller. It implements all the logic for animating the updates, doing section headers, and deletion. You can then create an instance of this object and feed it a fetch request and a block for configuring the cell, and the rest will be taken care of.

Furthermore, this approach extends to other protocols as well. One obvious candidate is UICollectionViewDataSource . This gives you tremendous flexibility; if, at some point during the development, you decide to have a UICollectionView instead of a UITableView , you hardly have to change anything in your view controller. You could even make your data source support both protocols.

Move Domain Logic into the Model

Here is an example of code in view controller (from another project) that is supposed to find a list of active priorities for a user:

However, it is much cleaner to move this code to a category on the User class. Then it looks like this in View Controller.m :

Some code cannot be easily moved into a model object but is still clearly associated with model code, and for this, we can use a Store :

In the first version of our example application, we had some code to load data from a file and parse it. This code was in the view controller:

The view controller should not have to know about this. We created a Store object that does just this. By separating it out, we can reuse that code, test it separately and keep our view controller small. The store can take care of data loading, caching, and setting up the database stack. This store is also often called a service layer or a repository .

This is very similar to the topic above: don't do web service logic in your view controller. Instead, encapsulate this in a different class. Your view controller can then call methods on this class with a callback handler (for example, a completion block). The nice thing is that you can do all your caching and error handling in this class too.

Building complicated view hierarchies shouldn't be done in view controllers. Either use interface builder, or encapsulate views into their own UIView subclasses. For example, if you build your own date picker control, it makes more sense to put this into a DatePickerView class than creating the whole thing in the view controller. Again, this increases reusability and simplicity.

If you like Interface Builder, then you can also do this in Interface Builder. Some people assume you can only use this for view controllers, but you can also load separate nib files with your custom views. In our example app, we created a PhotoCell.xib that contains the layout for a photo cell: 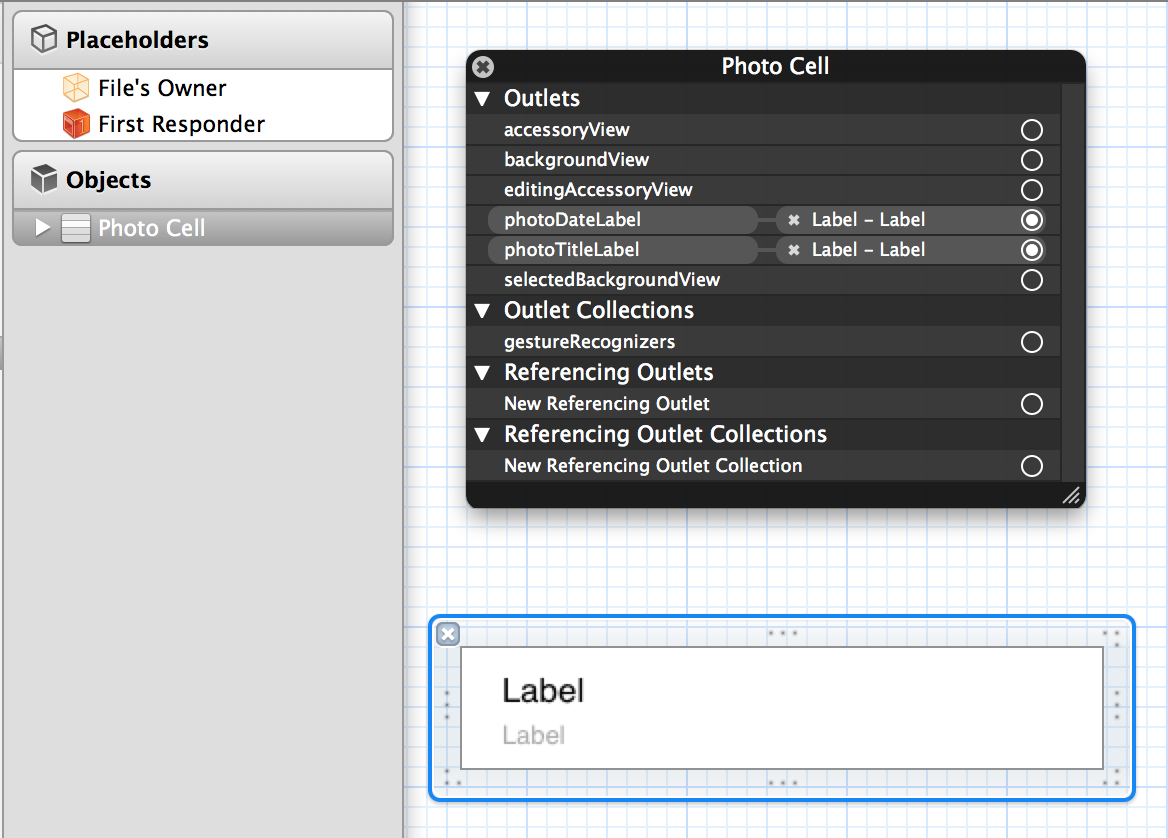 As you can see, we created properties on the view (we don't use the File's Owner object in this xib) and connect them to specific subviews. This technique is also very handy for other custom views.

One of the other things that happen a lot in view controllers is communication with other view controllers, the model, and the views. While this is exactly what a controller should do, it is also something we'd like to achieve with as minimal code as possible.

We often have the problem where one view controller has some state and communicates with multiple other view controllers. Often, it then makes sense to put this state into a separate object and pass it around the view controllers, which then all observe and modify that state. The advantage is that it's all in one place, and we don't end up entangled in nested delegate callbacks. This is a complex subject, and we might dedicate a whole issue to this in the future.

We've seen some techniques for creating smaller view controllers. We don't strive to apply these techniques wherever possible, as we have only one goal: to write maintainable code. By knowing these patterns, we have better chances of taking unwieldy view controllers and making them clearer.