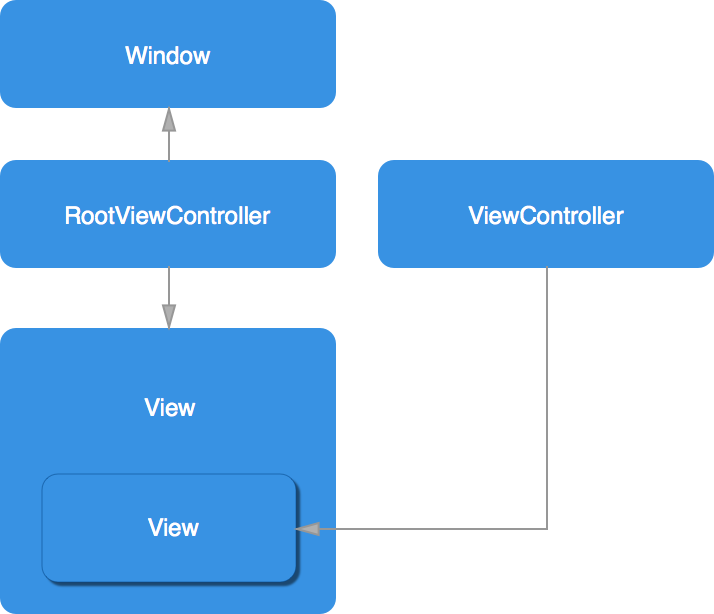 The UIWindow, which serves as an app's root view, is where rotation and initial layout messages originate from. In the illustration above, the child view controller, whose view was inserted in the root view controller view hierarchy, is excluded from those events. View event methods like viewWillAppear: will not get called.

The custom view controller containers built before iOS 5 would keep a reference to the child view controllers and manually relay all the view event methods called on the parent view controller, which is pretty difficult to get right.

When you were a kid playing in the sand, did your parents ever tell you that if you kept digging with your little shovel you would end up in China? Mine did, and I made a small demo app called Tunnel to test this claim. You can clone the GitHub repo and run the app, which will make it easier to understand the example code. (Spoiler: digging through the earth from western Denmark lands you somewhere in the South Pacific Ocean.) 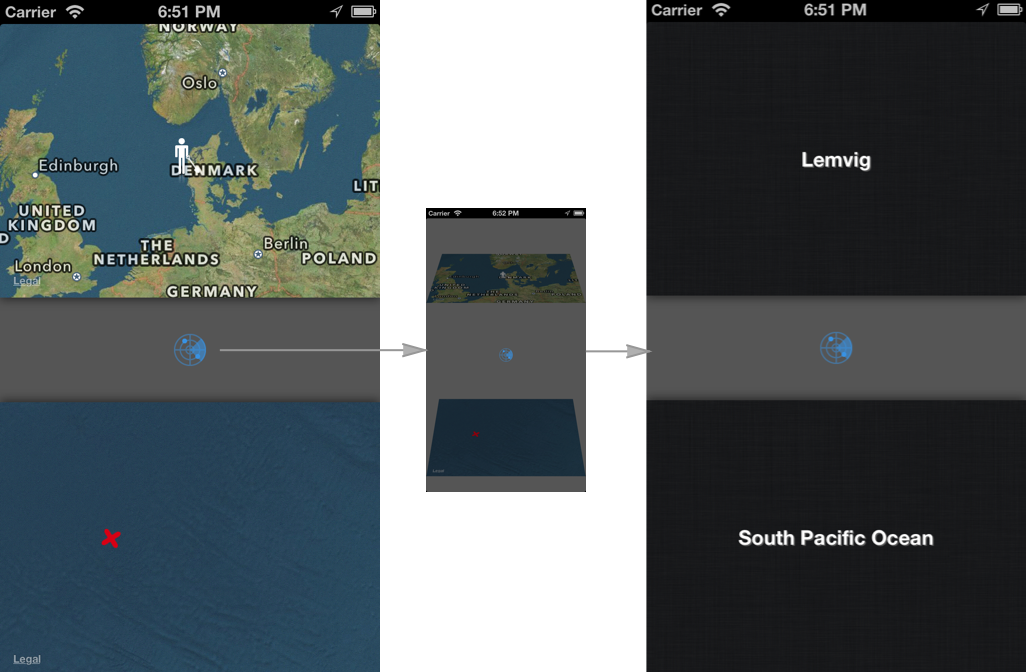 There are two map view controllers on screen. Each of them has to deal with dragging, annotation, and updating the map. Flipping these over reveals two new view controllers which reverse geocode the locations. All the view controllers are contained inside a parent view controller, which holds their views, and ensures that layout and rotation behaves as expected.

The root view controller has two container views. These are added to make it easier to layout and animate the views of child view controllers, as we will see later on.

The _startMapViewController , which displays the starting position, is instantiated and set up with the annotation image.

Now they will layout using the bounds of their super view. This increases the reusability of the child view controller; if we were to push it on the stack of a navigation controller, it would still layout correctly.

Apple has made the view controller containment API so fine-grained that it is possible to construct and animate any containment scenario we can think of. Apple also provides a block-based convenience method for exchanging two controller views on the screen. The method transitionFromViewController:toViewController:(...) takes care of a lot of the details for us:

This convenience method for view controller transitions automatically swaps out the old view controller's view for the new one. However, if you implement your own transition and you wish to only display one view at a time, you have to call removeFromSuperview on the old view and addSubview: for the new view yourself. Getting the sequence of method calls wrong will most likely result in an UIViewControllerHierarchyInconsistency warning. For example, this will happen if you call didMoveToParentViewController: before you added the view.

In order to be able to use the UIViewAnimationOptionTransitionFlipFromTop animation, we had to add the children's views to our view containers instead of to the root view controller's view. Otherwise the animation would result in the entire root view flipping over.

Child view controllers should contain the necessary logic to manage their view trees themselves -- don't treat them as dumb views. This will result in a clearer separation of concerns and better reusability.

When this property changes in response to moving the little guy with the shovel around on the map, the parent view controller communicates the antipode of the new location to the other map: